Some newer RIPs (raster image processors) used to prepare artwork for commercial printing don’t require that transparency in the art be flattened. We covered what transparency flattening is in this posting. For example, Adobe PDF Print Engine RIPs can accept PDF files that contain live transparency.

But when transparent objects must be flattened for PostScript processors in Adobe applications like Adobe InDesign and Adobe Illustrator, occasional problems can occur. To view these potential issues, you can use InDesign, Illustrator, and Adobe Acrobat Pro to view transparency interactions. 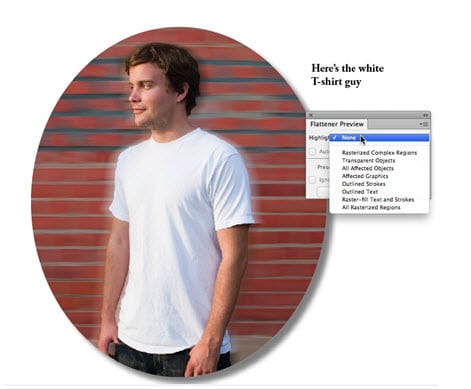 In the example shown, the image is surrounded by a drop shadow (a transparency effect). The type at the upper right doesn’t touch the image, but because it is lower in the stacking order than the image and it falls within the bounding box of the transparency effect, it is affected. If we select Highlight > All Affected Objects in the Flattener Preview panel, it turns pink, indicating that it’s an affected object. This could cause the type to spread (get thicker) when the transparency is flattened. 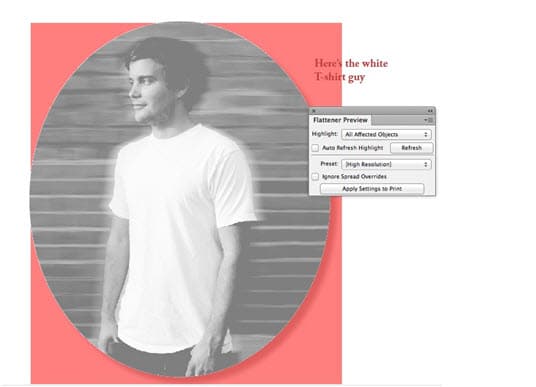 It’s a best practice when working with transparent objects to put text and thin vector objects above transparency to avoid such problems. In this case, moving the type to a higher layer will solve the problem.

All hail the humble business card! While its primary purpose is to let people know how they can get in touch with you, this small piece of paper says a lot about who you are and what you have to offer. It pays to get creative with it, which is why savvy professionals know to the up the ante, … END_OF_DOCUMENT_TOKEN_TO_BE_REPLACED

The Numbers Behind Direct Mail

Direct Mail Offers an Affordable Marketing Option Direct mail may be the marketing solution your small business is looking for. The direct mail industry is heating up, with overall spending increasing to $9.3 billion 2015. While spending is up, fewer companies are actually using this channel, … END_OF_DOCUMENT_TOKEN_TO_BE_REPLACED

What is Poster Marketing?

Does your company include poster marketing as part of its advertising strategy? If not, you’re missing out on a huge opportunity to grab your audience’s attention and turn prospects into buyers. 82% of consumers trust print ads like posters over other forms of advertising when making a purchasing … END_OF_DOCUMENT_TOKEN_TO_BE_REPLACED

From Bookmarks to Tickets, Who Will You Draft?

One of the many great things about working with Printing for Less (Printing for Less) is that we assign your project to one of our expert three person teams, https://www.printingforless.com/tsrteams.html. These teams can tailor your experience to fit your projects specific needs. This project started as a … END_OF_DOCUMENT_TOKEN_TO_BE_REPLACED

For years, editing PDFs was discouraged. There were too many things that could go wrong.  Ideally, edits are made in the original application to avoid any compatibility issues and the potential nightmare of keeping track of changes between formats. But improvements to the PDF format (thanks to … END_OF_DOCUMENT_TOKEN_TO_BE_REPLACED

Business cards are one of the most important, yet ubiquitous products a business can have. How do you make yours stand out? Printing for Less customer Learning Rx Brain Training Center took their business card design to a new level with a very unique die-cut, maximizing their logo's look.  Remember, not all … END_OF_DOCUMENT_TOKEN_TO_BE_REPLACED

Test Monki, one of Printing for Less's customers, created a cool "window static" for Opinion Jungle, a review and recommendation site for businesses. The piece at first glance resembles a coaster, but when peeled back, reveals a double-sided window static, perfect for doors and windows of businesses, cars and … END_OF_DOCUMENT_TOKEN_TO_BE_REPLACED

In today’s digital world, your customers are inundated with online ads and email marketing campaigns. Almost 75% of consumers report feeling overwhelmed by email overload, and nearly 40% use an ad-blocking tool. Digital marketing has its place. However, online ad fatigue makes it easy for it to get … END_OF_DOCUMENT_TOKEN_TO_BE_REPLACED