When creating type in applications designed for print—for example, Adobe InDesign, Illustrator and Photoshop—there are three types of fonts that you can use:

• PostScript Type 1. This is the font format developed originally by Adobe as a proprietary format but now published. PostScript Type 1 fonts are stored as two files: The scalable outlines are stored in one, and fixed-size bitmaps for the screen and metric information in the other. This format is an older format used by graphics professionals and is available from all font developers. In the illustration below, a font family, Adobe Caslon, has four styles—regular, italic, semibold and semibold italic. The bitmaps are stored in the FFIL file; the outlines are labeled LWFN.

• TrueType. This font format is most popular with general computer users and is also available from all font makers. The font outlines and metrics are stored in a single file.

• OpenType. This is the newest font format, which overcomes some of the limitations of PostScript and TrueType fonts. Adobe and Microsoft developed this format originally, but OpenType fonts are now being released by virtually all font vendors.

The font family shown below are OpenType fonts (hence, the extension is .otf). In an OpenType font, one font file stores all the information for the font. One of the advantages of the OpenType format is that it can be used cross-platform. That is, the same file works on both Macintosh and Windows computers.

When fonts are viewed in the Adobe Creative Suite applications designed for print the applications display a font menu which gives the option of previewing the appearance of the font. In Adobe InDesign, you can also see what the font type is. In the illustration below, “O” indicates an OpenType font; “TT” is a TrueType font; and “a” is a PostScript Type 1 font. The sample of the font is shown on the right. 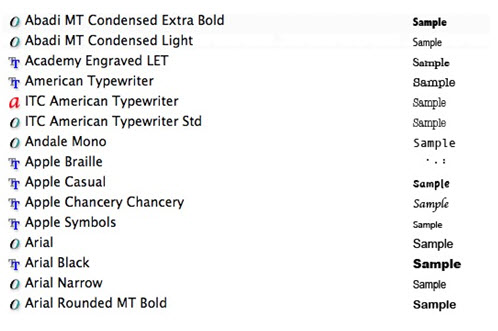 We’ve added some real innovations to the printing industry in our 20 year history, and one that we’re really proud of is SmartFlex® paper. This is a synthetic paper that is made from plastic but has the same look, feel, and properties (well, the good properties) of regular wood-pulp. We developed … END_OF_DOCUMENT_TOKEN_TO_BE_REPLACED

The Importance of Sustainability in Printing

Like any industry, the printing sector has an environmental impact on the world. Simply put, by providing products and services, we consume resources and energy. With sustainability becoming an increasingly important goal in the face of resource depletion and climate change, key players in the … END_OF_DOCUMENT_TOKEN_TO_BE_REPLACED

Get Your Printing Done in Time

It’s the holiday season - and that means notecards, coupon mailers, and holiday thank-yous are going to be flooding mailboxes. If you’re planning on mailing printed pieces, you might already be under the gun with a looming deadline. To get your printing done in time, you have to plan for proofing, … END_OF_DOCUMENT_TOKEN_TO_BE_REPLACED

Holiday marketing? You may wonder why it's a topic now, as you sip iced tea on your porch and enjoy the summer. But it is never too early to start thinking about your holiday marketing planning! No matter what kind of business you run, it is important to plan ahead for the holiday shopping season … END_OF_DOCUMENT_TOKEN_TO_BE_REPLACED

How to Design a Brochure That Actually Gets Used

We all know that direct mail is incredibly popular. Study after study proves that people love to receive relevant, attractive, and personalized mail. Brochures are a versatile solution to your direct mail needs. They are compact, can be stacked in offices or passed out by hand, act as self-mailers, … END_OF_DOCUMENT_TOKEN_TO_BE_REPLACED

This is the fifth and last posting about formats for saving images. We started a couple weeks ago with the Photoshop PSD format. Then we continued with TIFF, EPS and JPEG formats. Usually Photoshop images are created to be placed in another application. And, as we have pointed out in the linked … END_OF_DOCUMENT_TOKEN_TO_BE_REPLACED

Logo Placement: A Branding Guide That Doesn’t Overdo It

Your logo is a little slice of your business, but an important one. It deserves to be front and center in your marketing campaigns. A logo is your badge, sure, but where you position it should depend on the content, the messaging, and the action you’re trying to persuade customers into … END_OF_DOCUMENT_TOKEN_TO_BE_REPLACED

Wedding Coasters — Not just for your champagne glass!

We have all received wedding announcements and other printed materials announcing the date and location, but this young, frisky couple added a twist to their big day--wedding coasters. The design and imagery worked great with their destination wedding in Hawaii, and they were placed at the tables of … END_OF_DOCUMENT_TOKEN_TO_BE_REPLACED